11.13.2017 | 6:18 PM car carrier trailer, known variously as a car-carrying trailer, car hauler, auto transport trailer, etc., is a type of trailer or semi-trailer designed to efficiently transport passenger vehicles via truck. Modern car carrier trailers can be open or enclosed. Most commercial trailers have built-in ramps for loading and off-loading cars, as well as power hydraulics to raise and lower ramps for stand-alone accessibility.
Commercial-size car carrying trailers are commonly used to ship new cars from the manufacturer to auto dealerships; Mardan cargo and car carrier services is a big industry, employed by car owners who are relocating and choose to ship their cars instead of driving, as well as consumers who have just purchased a vehicle on the second-hand market (particularly online) and need it delivered to their location. Like other semi-trailers, most commercial car carrier trailers attach to the tractor using a fifth wheel coupling. Trailers can either be enclosed, possessing walls like a conventional box trailer, which affords the shipped vehicles more protection at the cost of lower capacity; or open, as in the commonly seen skeletal tube steel design, which exposes the vehicles to the elements but allows for greater carrying capacity. To load vehicles on the top deck of a double-decker commercial trailer, the rear half of the deck can tilt and be lowered hydraulically, forming a drive-up ramp to the upper deck. The top deck is usually loaded first and off-loaded last, since the presence of cars on the lower deck can make it impossible to lower the top deck ramp. Trailer hydraulics are operated using a control box mounted on the trailer itself. 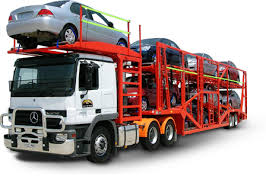